In Islamic states, the palace is the center both as the private complex where the ruler lives with his family and the state affairs are performed.

However the middle period in the development of Islamic art offers an excellent panorama of Islamic palace designs by enchanting mosaic of palatial structure;

One of the seven wonders of the world and one of the structures representing the highest level of architecture reached by Islamic civilization, the Alhambra Palace is shown similar structure with the surreal palaces in Arabian Nights.

The Palace is distinct among Medieval palaces with magnificent planning, exquisitely decorative accents, and its many fascinating gardens and fountains by situated on top of a forested red-clay hill. 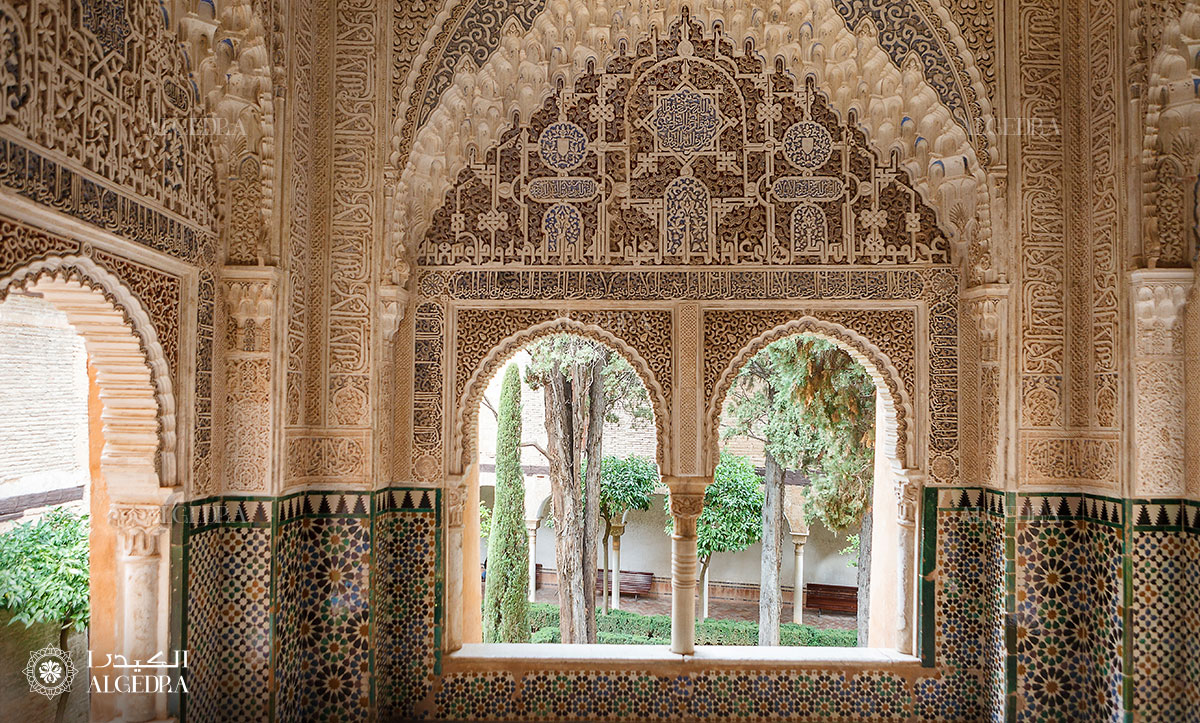 Many of the designs were excerpted from Qur’anic verses or poems which were written in the flowing and ornate style.

Scattered 30 poems covers all along the Alhambra as well as prayers quotations from the Qur’an, apothegms, notes of construction and praises of the sultans which is calligraphy of palace is so stylized that it is difficult to distinguish from decorative elements. 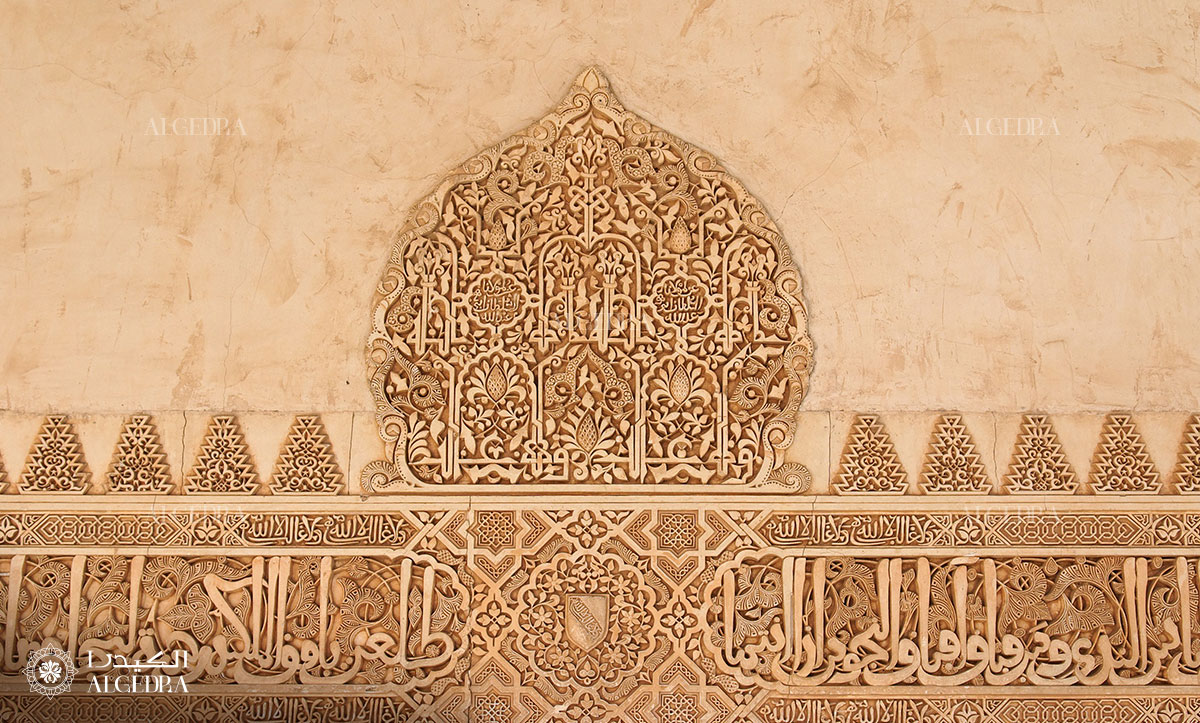 Palace design style is mujeder architecture contains various and excessive decorative details, it is also simple and light. Also elaborate lace-like arabesque decorations made with stucco and color tiles are adorned in the interiors of Alhambra.

Most of the decorations are geometric patterns, vines, leaves, flowers, trees, acorns, pomegranates, shells and plants are engraved with sophisticated and stylish touches.

In this part of Alhambra which is known The Comares Palace, there is the Salon de Comares and is adorned with the most diverse decorative and architectural arts included in the Alhambra. 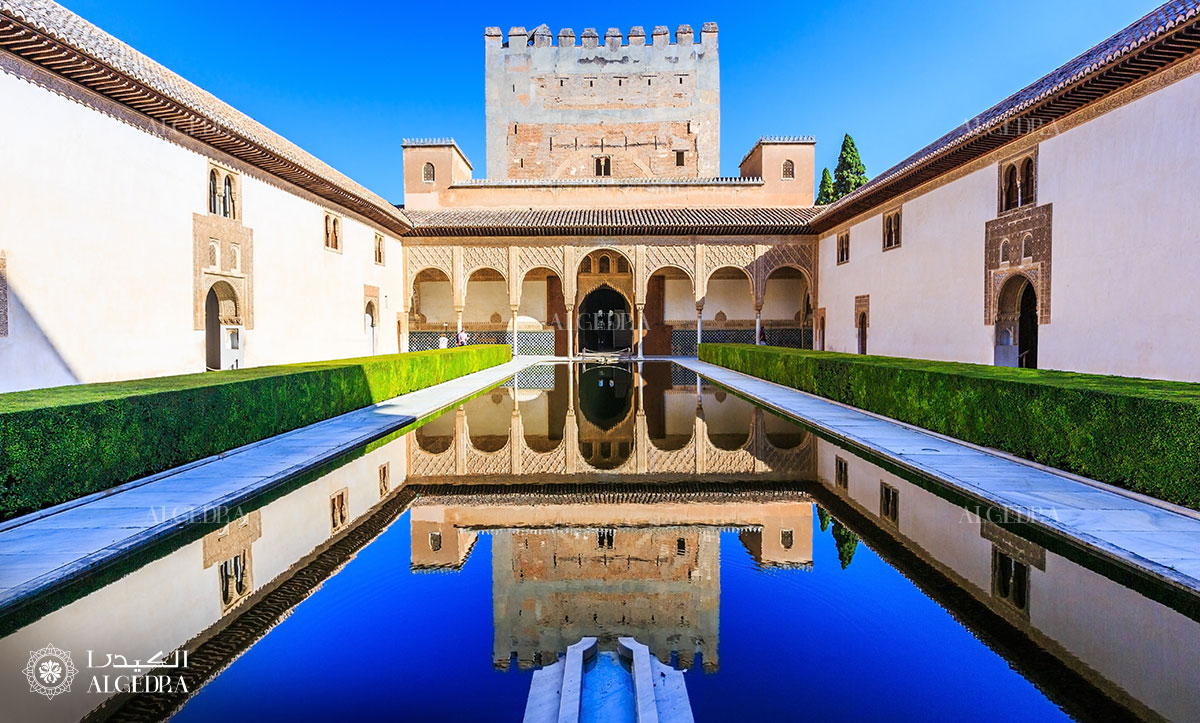 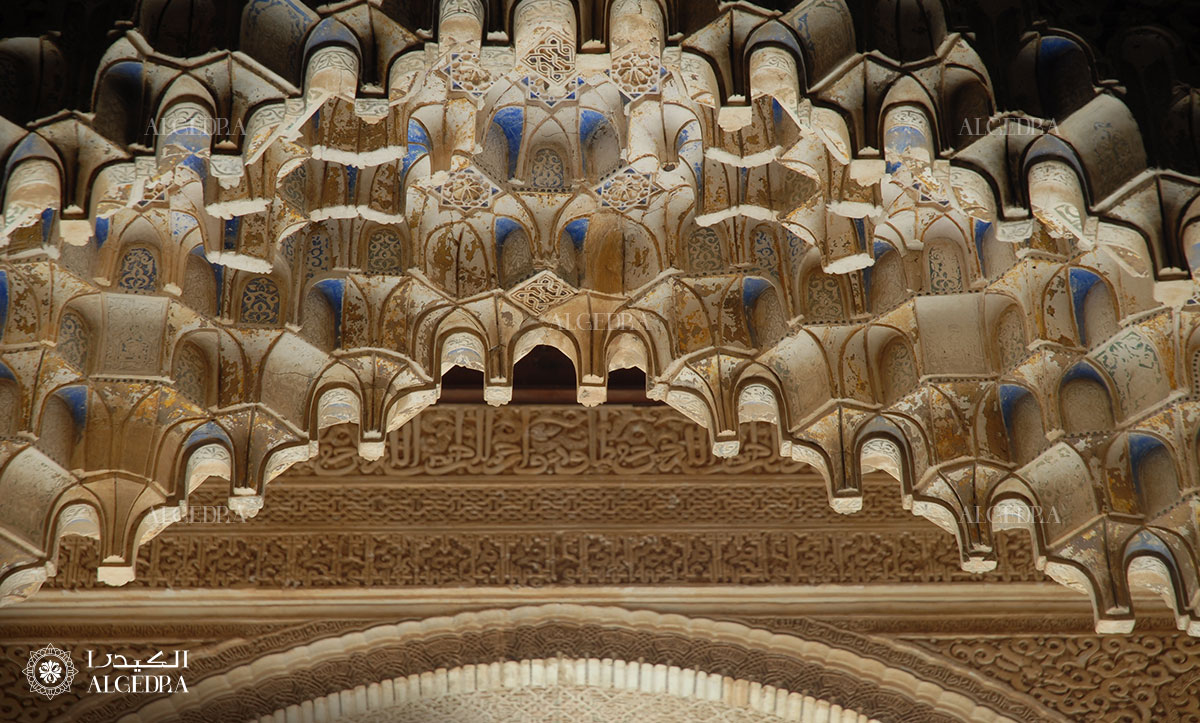 The walls are lavishly decorated with tiles ornated with intricate geometric patterns. The remaining surfaces are covered with intricately carved stucco motifs arranged in bands and panels of curved patterns and lines.

2- Palace of the Lions

The most famous feature of Palace was built by Muhammad V in the 14th century. 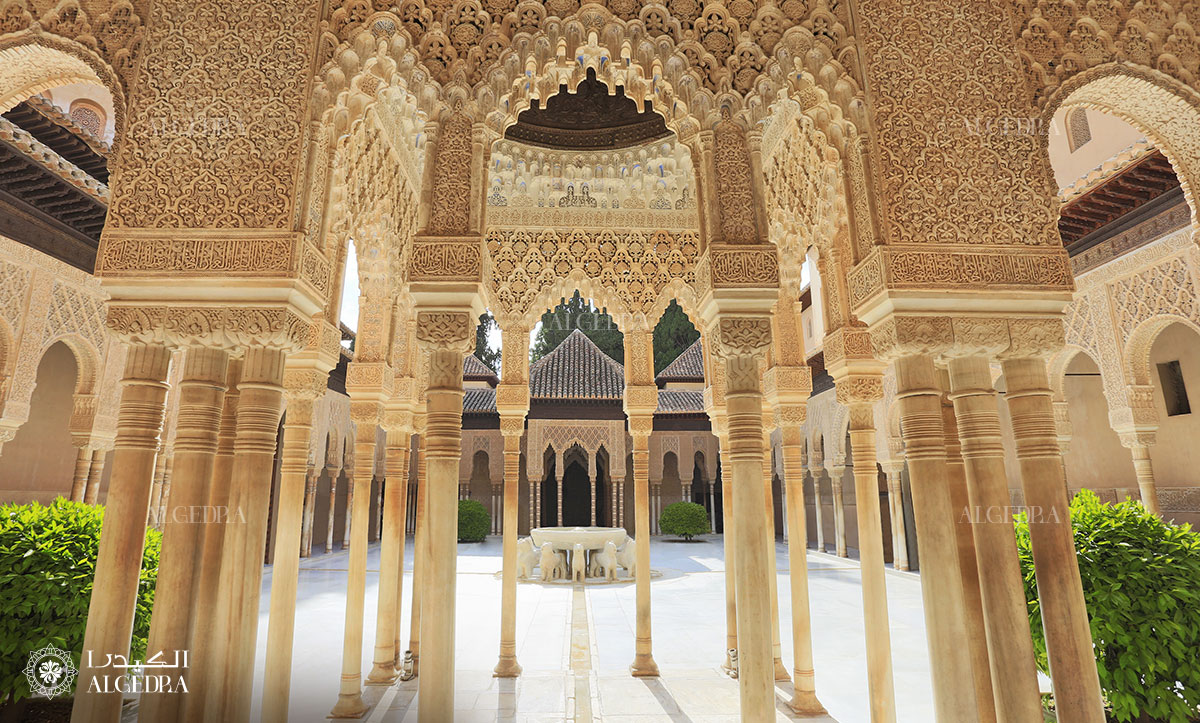 An arched patio surrounds the courtyard and displays fine plaster carvings held by a series of thin columns. Two decorative pavilions lead to the courtyard on the East-West axis, highlighting the royal house behind it. 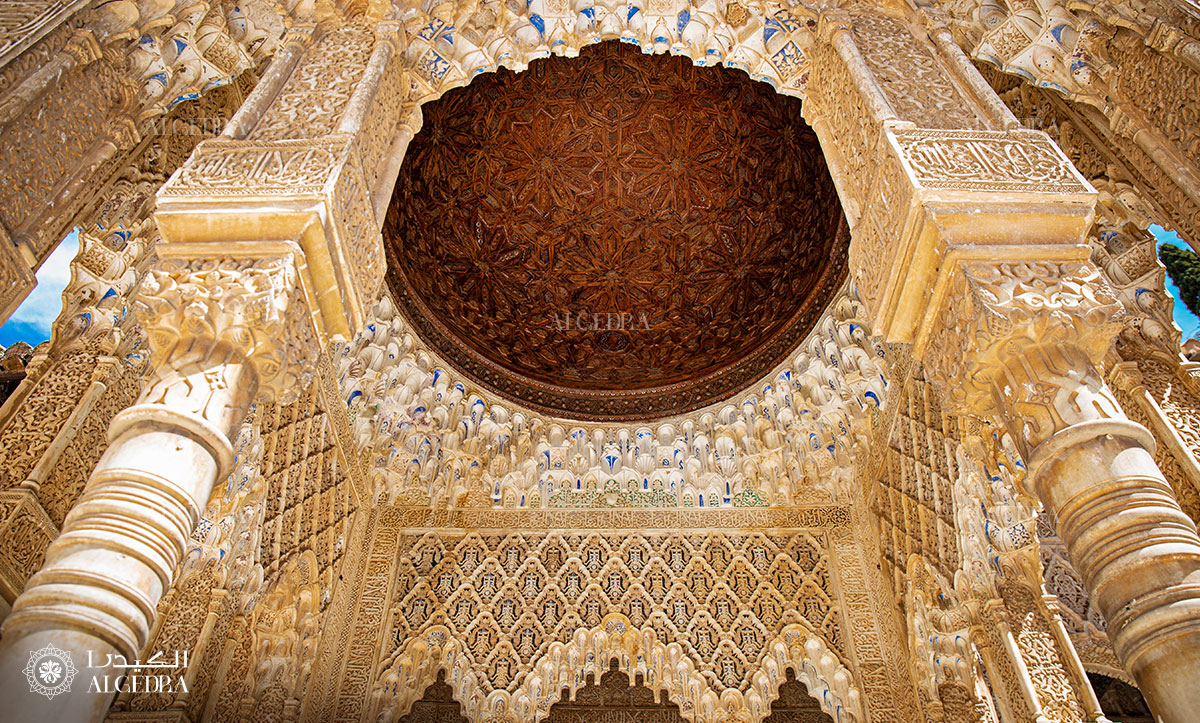 It is the one of the oldest palace in Alhambra, built in the early 14th century and is also known as del Portico.

The five-arched portico overlooks a large pool in the center of the garden. The main room, known as Las Damas, is located in the tower, behind the portico. 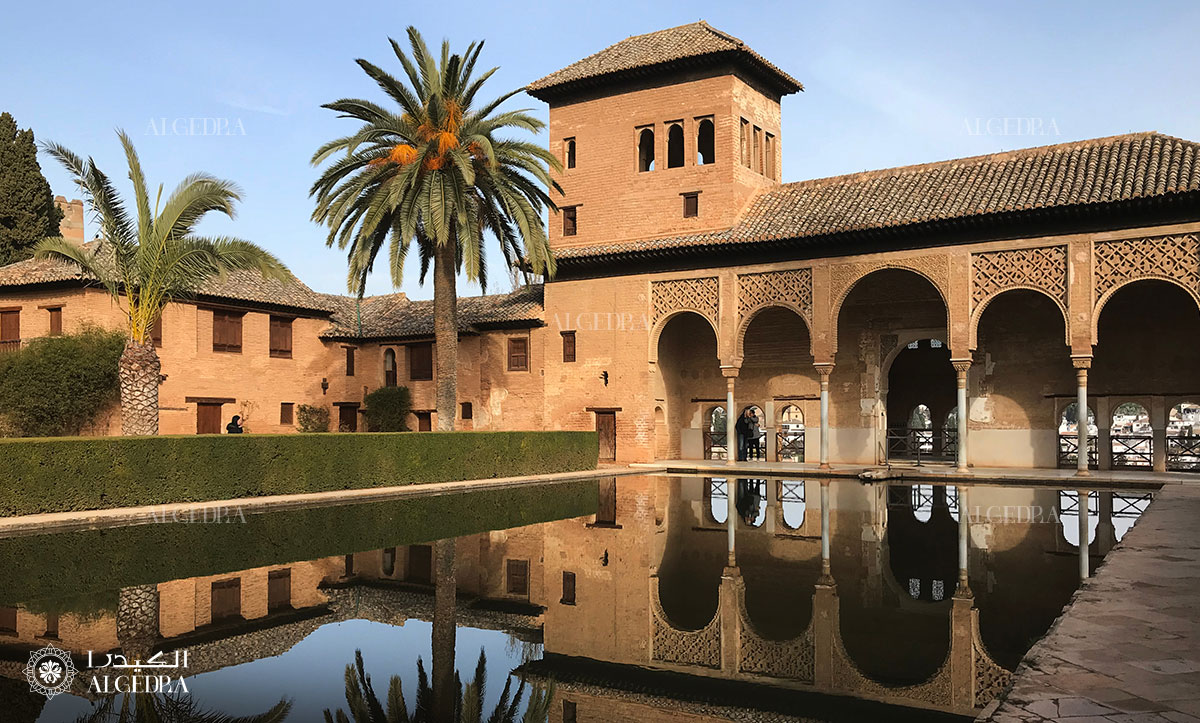